Kafka is an Apache project initially developed by LinkedIn. It is a distributed publish-subscribe messaging system. It is designed to process real time activity stream data such as logs and metric collections. It is written in Scala and does not follow JMS  (Java Message Service) standards.

So, we can say that the producers send messages to the Kafka brokers which in turn serves them up to consumers. Kafka mainly uses Zookeeper to form cluster of nodes (producer/consumer/broker) 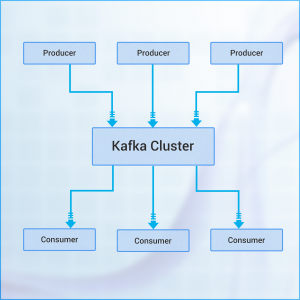 As mentioned earlier, topic is a category or feed name to which messages are published. For each topic the Kafka cluster/broker maintains a partitioned log. Each partition is an ordered, immutable sequence of messages that is continually appended to a commit log. The messages in the partition are each assigned with a sequential id number called the offset, which uniquely identifies each message within the partition. The Kafka cluster retains all published messages, irrespective of whether they have been consumed, for a configurable amount of time.

Fig. Anatomy of a partition in a topic.

A topic may have many partitions thus enabling it to handle an arbitrary amount of data. They act as the unit of parallelism. The partitions of the log are distributed over the servers in the Kafka cluster with each server handling data and requests for a share of partitions. Each partition is replicated across a configurable number of servers.

Kafka assigns each server with a leader and follower, which helps in the whole replication cycle of messages in the partitions.

In a nutshell, Kafka partitions the incoming messages for a topic, and assigns these partitions to an available Kafka broker. The partition replication feature was enabled in Kafka 0.8 to make the cluster more resilient against host failures.

Producers are processes which publish data to a topic of their choice. The producer is able to choose which message to assign to which partition within a topic. This can be achieved using round robin fashion or by any other semantic partition function.

Use Cases of Kafka

Apache Kafka has a few popular use cases by far. It was mainly introduced for website activity tracking for real-time publish-subscribe feeds. It can also be used for Messaging, Event Sourcing and Stream Processing etc.

Steps for Installation and Server Setup

The latest stable version of Kafka is 0.8.0 release. Follow these steps to set a Kafka message service:

(Here you can mention the number of replica instances, partitions and name for the topic)

Now type down the message you want to send.

Here, you would be able to view the published messages from the last step.